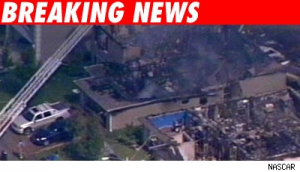 It’s the typical crisis-training scenario – The phone rings at 8:30 a.m. on a Tuesday morning. You are informed that a company plane carrying an executive has crashed in a neighborhood killing children.  For Ramsey Poston this was no drill, it really happened.

Mike Klemm, a licensed pilot for 23 years and Bruce Kennedy was a licensed pilot who had about 200 flight hours.  The Cesna-310, a 30-year-old twin propeller plane, was in NASCAR’s fleet since 1995 and used mostly for deliveries.

The victims included a 24-year-old mother and her 6-month-old son.  Next door, a 4-year-old boy was killed while his mother, father and 10-year-old brother were badly burned.

Questions arose as to Kennedy’s qualifications and whether he should have been flying the plane.  There were also questions about the age of the plane and NASCAR’s upkeep of its fleet of planes.

As per protocol, the National Transportation Safety Administration (NTSB) immediately opened an investigation of “man, machine and the environment.”  NTSB vice chairman Robert Sumwalt said, “We’ll be reviewing the aircraft maintenance records and any other records associated with this airplane.”

Families of the victims filed multi-million dollar lawsuits against NASCAR, which had the potential of generating highly emotional coverage and none positive for NASCAR.

While the tragedy of that day could not be undone, it was critical that NASCAR manage a plan in the immediate aftermath, the coming months of lawsuits and investigations and perhaps most importantly in the event of a second crash.

Mr. Poston created a plan to address all three strategies working closely with the executive team and NASCAR’s General Counsel.  As Mr. Poston often says, “in a crisis the public wants to know three things, what happened, why did it happen and what is being done to avoid it happening again.”

The strategy was to be absolutely forthright and to echo in communications the corporate policy of cooperating fully with the NTSB during its investigation.  Likewise, the legal team was working closely with the families to make them whole and avoid contentious and lengthy legal battles and to remind the public that NASCAR and the Kennedy family were victims too.

Handled correctly, one tragedy is manageable for an organization’s reputation, a much more serious threat is a repeat incident, which this could be characterized as deeper problems.  As a result, NASCAR worked quickly to take action and make visible changes.  This included an independent review of all flight procedures and immediate improvements where possible.  Specifically:

As expected the NTSB was critical of NASCAR’s safety procedures but with a lot of hard work it was also noted that the company had made significant progress in being recognized as a leader in flight safety.  The victim lawsuits were settled quickly and without further public fallout or damage to the company or family.