PR Observations from the Lance Armstrong interview with Oprah Winfrey

Emotionless admission: Lance Armstrong admitted that he used performance-enhancing drugs (PEDs) to win each of his seven Tour de France championships.  He referred to himself as a flawed man and admitted to lying.  However, he did so without much emotion or contrition, which made him less believable to many viewers.

Lack of candor I: Armstrong could not or would not explain why he decided to conduct the interview.  Early in the interview Oprah Winfrey asked, “Why now?”

Armstrong: “That’s the best question, it’s the most logical question. I don’t know that I have a great answer.  I’ll start by saying this is too late, it’s too late probably for most people and that’s my fault.  I view this situation as one big lie that I repeated a lot if times.”

Unfortunately, Oprah left this question and didn’t do a sufficient job following up.  Clearly there must have been something that motivated Armstrong to call Oprah and to declare to the world that he’d lied – and lied a lot.

Lack of candor II: Armstrong refused to say whether or not Betsy Andreu was being truthful when she claims to have witnessed him admit to a doctor at an Indianapolis hospital that he was doping.

Oprah: “Was Betsy telling the truth?”

Armstrong: “Um, I’m not going to take that on. I’m laying down on that one. 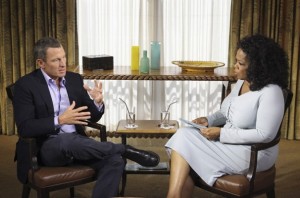 Again, Oprah allowed Armstrong to transition to a different subject without pressing him as to why he couldn’t or wouldn’t answer the question.

Bizarre moment: The Betsy Andreu segment led to the most bizarre moment in the interview.  Oprah asked about the phone call Armstrong made to Andreu and he found it quite important to make the point that he never called her fat. He said, “I called you crazy, I called you a bitch, I called you all these things but I never called you fat.”  Given all the terrible things he’s admitted to doing, including baseless lawsuits, this point seemed trivial to say the least.

Urge to split hairs: The most troubling moment in the interview was when Armstrong reverted back to the “technical” lies, like when asked if he retroactively failed six consecutive tests from 1999 to 2005.  Armstrong clearly struggled with this answer.

Oprah: “You said time and again in dozens of interviews that you’ve never failed a test.   Do you have a different answer today?”

Armstrong: “Um, no. I mean I never…I didn’t fail a test.  Were there some stuff…stuff that’s retroactively tested and..so, technically yes those were retroactively – I failed those.”

Missed opportunity:  Armstrong would have fared much better if he had some positive steps to announce. Those steps could have been a commitment to actively work with governing bodies to help identify the use of PEDS or even a plan to meet with everyone in cycling that he hurt to personally apologize.

Oprah out of her element: This type of hard news format did not mesh well with Oprah’s interviewing skills. Oprah too often failed to follow up at key moments of Armstrong’s answers leaving too many open questions.

Production mistake: OWNTV made a mistake by not producing a tight, riveting 30-minute interview segment.  The broadcast company would have done better to feature a well-produced single night package and then post the full interview on OWNTV.com.