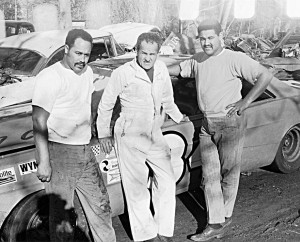 When Wendell Scott’s career is discussed it is inevitably said that he had one win and with that one win at Jacksonville in 1963 he was the first African American driver to win a NASCAR race.  Wrong.  Wendell Scott won at least 128 races at local tracks long before he started his premier series (Sprint Cup) career.

Based on his body of work, Scott deserves to be in the NASCAR Hall of Fame and like other pioneers such as Red Byron and Raymond Parks it is not a matter of “if” but “when” he is enshrined.

The 2013 Hall of Fame class is to be congratulated.  The Voting Committee was faced with perhaps its toughest vote to date.  The selections of Rusty Wallace, Buck Baker, Leonard Wood, Cotton Owens and Herb Thomas were right on and all worthy.  But as we look to next year’s nominating and voting process the Wendell Scott story should be discussed in the right context.  Scott wasn’t just the “black driver with a win” he was a champion, a fierce competitor and earned the respect of his fellow drivers.

Perhaps the most remarkable fact about Scott is that when he began his premier series (then called Grand National now called Sprint Cup) career he was forty years old!  Scott brought along his tenacity and grit from the local tracks to big time racing.  In his 13 year career he managed 495 starts which ranks him 32nd on NASCAR’s all time list.  During that time Scott amassed 147 top 10s, 20 top 5s and one win.  He also won the pole at Savannah, Ga in 1962 that set the dirt track record for all ½ mile tracks.

Prior to his racing career, Scott, like many of his contemporaries, served his country in World War II in the U.S. Army.  There he worked in the motor pool for three years where he honed his mechanical skills, which would later serve him well in his racing career.

Following the war Scott returned home to Danville, Va. and took a job as a cab driver continuing his work around cars.  Soon Scott began his racing career.  According to a recent story in the News & Advance (Lynchburg, Va.), “Scott’s racing career began at the Danville Fairgrounds in 1952 and from there, he moved his way up through the ranks. He won 128 races in the hobby, amateur and modified ranks.”

Scott ran in both the NASCAR Sportsman Division (Nationwide Series) as well as the Modified class and ranked in the top 10 nationally in both.  He accomplished this while racing against the likes of Ralph Earnhardt, Cotton Owens, Ned Jarrett and Fireball Roberts.

In 1959 Scott won 22 races besting the tough competition at tracks such as Waynesboro, Danville, Zions Cross, Roanoke, Tidewater and others. He also won both the track championship at Southside Speedway in Richmond, Va and the state NASCAR Sportsman Division championship that year.

As Scott earned his stripes he became one of the guys earning respect and building friendships with fellow drivers.  Richard Petty and Crew Chief Dale Inman and others looked after Scott providing him with parts and pieces to make sure he could compete each week.

Like many of the great teams of the time racing was a family affair and it was no different for the Scott’s.  Wendell’s family played a role “back home in the shop” and in the pits.  Sons Wendell, Jr., and Frankie spent their time under the hood and building engines and parts during non-racing days and pitting the car on race day.

Wendell Scott, Jr., and I have had several conversations about his dad.  Some were good stories, some were not.  But Wendell Jr., was always proud of how his dad was able to earn the respect of the greatest drivers in the world.  In Scott’s racing days restaurants were primarily “whites only” and when a proprietor attempted to throw Scott out, one of his fellow drivers would typically say “if you are not going to serve Wendell, then you won’t be serving any of us.” And that was that, he was one of the guys.

While Scott’s win at Jacksonville was momentous, it has actually obscured many of his accomplishments.  Scott’s tough but smart driving was his hallmark and not unlike driving styles of Alan Kulwicki in the 1980s and Jeff Burton today.

The number of wins a driver has cannot be the standard for induction to the NASCAR Hall of Fame – there are only 12 that have 50 or more premiere series wins, making it a pretty small club.  So the Voting Committee will have to evaluate drivers entire body of work and their overall impact on the sport.  When you look at Wendell Scott’s body of work and what he still means to the sport today, he should be an obvious choice for enshrinement.

Ramsey Poston is the architect of the NASCAR Hall of Fame nominating and voting  process and currently president of Tuckahoe Strategies.  (www.TuckahoeStrategies.com)