Be Your Own Media Machine 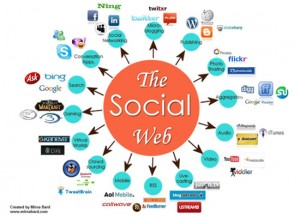 With just one push of a button Lebron James (@KingJames) reaches 3.7 people who want to hear from him on Twitter; @LanceArmstrong reaches 3.3 million; @WholeFoods 2.2 million and @RedCross 652,679.  On Facebook Nike reaches 8 million fans and the HBO show Twilight has 2.5 million.  That’s power and influence.

In today’s digital world every individual, company and organization can be its own media machine.  2008 marked the social media tipping point when Facebook reached 100 million users and Twitter recorded 400 million tweets.  Up until that time the “traditional” media had a virtual lock on all news and information.  Yet, so many entities are reluctant to aggressively convert to a media strategy deeply grounded in digital.

For over a hundred years companies have had two basic media routes to reach their customers. The first was “earned media” in which a company prepares a press release provides it to reporters and hopes and prays for a positive story.  A well-placed earned media story is extremely effective and lends great credibility to the product, however the company sacrifices control of the story.  The outcome of stories is in the hands of the reporter and editors.  Even a “good” story often includes criticism of some of the product’s flaws and comparison to competing brands.

The second route to customers has traditionally been advertising.  Madison Avenue is virtually paved with gold shelled out by corporations using paid advertising to reach and influence its customers.  Traditional advertising, which is expensive, is not as effective as an earned media story but the company gets to have complete control of the message and the audience.

Today, however, the message can be controlled, highly targeted and relatively inexpensive.  The ability to engage audiences and for them to quickly spread the word is what makes social media so powerful.  Nothing drives awareness, emotion and loyalty for a brand or idea like your friends and family talking about it.

Given the power potential and the opportunity to connect with audiences the risks are too high not to be fully engaged on the digital platform.

Here are 5 basic ways to build your own media machine:

First and foremost don’t abandon your website – it’s a vital element of your overall presence – it is your virtual home.  Like your brand, keep your website up to date, informative and connected to each of your social media outlets.  Use websites to highlight products, key brand ambassadors and provide in-depth information about the company and products.  I especially like Heinz’s corporate website.  It is bright, colorful and informative.

The advantages for using Facebook as a marketing tool are increasing at a fast pace.  Facebook is clearly making changes to help marketers tell stories with larger more colorful content opportunities such as Facebook “ads” and “Sponsored Stories.”

This new paid content application allows users to design specific content, target precise audiences, set a budget limit and quickly track results.  Facebook ads are flexible and can be developed to accomplish a range of goals to:

All of this leads to greater engagement providing companies the opportunity to connect with loyal customers, new customers and even angry customers.  The Nike Facebook page is remarkably well designed and run.  Nike recently engaged its 8 million fans on a daily basis with campaign called “5 Days of Instagram.” The campaign asks fans to post photos to Instagram using the hashtag #counts (which is related to the brand’s “make it count” campaign) Fans actively posted photos of them at play, competing and training with thousands of “likes” and “shares.”  This is engagement at work – Nike spent virtually no money, probably sold plenty of products, promoted Instagram, and had customers feeling like they are part of the brand.

While doing some research I came across a gem of a tweet from 2009.  That tweet claims the following:

“Twitter actually isn’t popular.  It’s all media hype – very few people actually use it or check it, because it’s more or less pointless.  You get more status updates from friends on facebook and if you want to follow news/celebrities, there are websites that do a better job.  There’s a Harvard study out there that says 85% of twitter accounts have only been used once or something. It’s all smoke and mirrors – don’t waste your time!”

Oh, well those were the good ole days before – well you know, before Twitter became a thing.  In 2011 Twitter reached key milestones: about 50 million active users sent 200 million tweets each day or about 2,400 tweets per second, totaling about 1.4 billion tweets per week. Twitter is a powerhouse.

Gatorade is one company that keeps fans engaged via Twitter presenting followers with questions and quizzes each day; responding directly to questions from followers and providing words of inspiration – 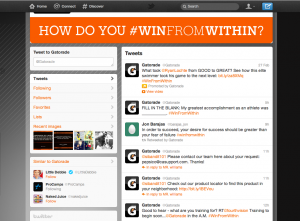 not to mention selling some product.  The company launched the “Gatorade Social Media Command Center” a couple years ago.  The company keeps engaged with its customers on all platforms and in doing so can provide ongoing information about its product and where to purchase it.

The American Red Cross hosts an excellent Twitter page that keeps 650,000 followers updated on disasters and resources.  During the recent tornado activity in Kentucky the Red Cross twitter feed was actively providing information about shelters, preparedness and how to located friends and family.  Taking its digital strategy even further the Red Cross has teamed up with Dell to launch a “Social Media Digital Operations Center” which will assist the Red Cross’ ability to engage with the public during emergencies.

Video is a very powerful medium and an every improving YouTube provides an easy platform to include all of a brand’s channels, featuring video.  Coca-Cola has a brilliantly designed YouTube page that features extremely creative ads.  To say the page has been successful would be an understatement; the best selling drink in history, has 60,000 subscribers who have watched videos over 61 million times.

Best Buy has an exceptionally great YouTube page that features the company’s branding but also provides a host of exclusive videos with musicians like Adele, and Dierks Bentley (@DierksBentley) and movie stars talking about their latest release.  Perhaps the best part of the video is that Best Buy is not cramming product down the throats of its viewers – it’s a more subtle approach, which is very effective.  The page also includes a store locator, information about support and product videos.

The new kid on the block is Pinterest, which is a virtual bulletin board where fans can “pin” their favorite images.  If there is anything visual about your product, organization, sport or image then Pinterest is another valuable outlet to reach customers, supporters and fans.  Pinterest is an outlet where fans and customers can literally promote brands and products in the most colorful ways. Search the alt-indie rock band “Wilco” on Pinterest you will find an assortment of concert photos, posters links to albums.  The platforms also allows for discussion and comments and the ability to link to other social and retail sites.

Clearly, the digital world presents all marketers and even self-promoters the ability to reach mass audiences quickly and efficiently. At Tuckahoe Strategies we believe where reputation and branding are concerned, “we all live in the digital world.”

This column was originally published by Technorati at http://technorati.com/social-media/article/be-your-own-media-machine/page-4/