If you watched any of the 34th America’s Cup then you witnessed the greatest in the sport’s 162 year history and one of the greatest sports stories of the year.  ORACLE Team USA (OTUSA) came back from a 1-8 deficit to challenger Emirates Team New Zealand (ETNZ) to win 9-8.  There’s really never be 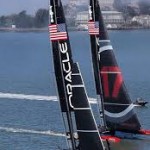 en anything like it.  In the MLB no team has ever come back from a 0-3 World Series deficit and it’s rarely happened in the NBA Finals.
It was on September 19 that ETNZ took what virtually everyone believed to be an insurmountable 8-1 lead.   That’s when Team USA began chipping away.  OTUSA picked up a win on Sept. 19th; another on the 20th; then two more on Sunday the 23rd. and another win on the 23rd and two more on September 24 tying up the series at 8s.

That set up a winner take all race on the San Francisco Bay with 72-foot catamarans literally flying across the water at speeds of up to 50 mph.  Each boat has a crew of 11 world-class athletes that have trained for this over the past three years.  With the stage set, OTUSA and ETNZ raced it out one more time and once again it was OTUSA for the win and the championship.

Following the dramatic racing on the San Francisco Bay, the sport is poised for a breakthrough among casual sports fans.  The sport will not challenge the major American sports leagues anytime soon but this year’s America’s Cup, which was broadcast on NBC Sports, exposed the sport to millions of new fans.

The AC72s, as the boats are known, provided exactly what ORACLE CEO Larry Ellison wished for three years ago when he said he wanted to create, “NASCAR on the water.”  The AC72s speeds of 50 mph are about three times faster compared to typical speeds in past America’s Cups.  It also made for close and exciting racing.  It was radical.

The question now is what does this mean for the sport?

There are a number of issues still to be addressed, primarily, that of costs.  The staggering costs, estimated to be around $100 million to run a team from soup to nuts is a barrier to entry for many countries.  That number needs to come down in order to have a bigger field of challengers.  It’s a matter that Ellison knows needs to be addressed. Another big question will be where Ellison will locate the 35th America’s Cup.  While San Francisco is his backyard and the Bay made for a perfect natural theatre, many in the city including the local media were highly critical of the event.  While a return to SF is likely there are plenty of attractive options that include Newport, RI and even New York City.

These are all matters that will likely be worked out in the months to come.  The important thing for the America’s Cup is to build on the momentum.  The time is now to reach out to new sponsors and to the broadcasters to help build the property into an unlikely powerhouse.