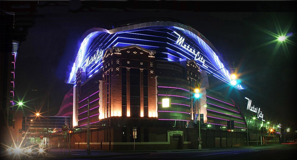 Ramsey Poston led the strategic efforts that opened the door to Detroit’s economic revival with the successful referendum to build three casinos.  Since that victory in 1998, major downtown redevelopment projects, new sports facilities, major conventions and events, among other things have been part of the revitalization mix.

The odds were stacked against the statewide ballot measure getting the majority of “Yes” votes.  Predictably, polls showed the proposal enjoyed strong support in the city itself but the suburbs and upstate areas were much more skeptical – or even hostile – to the idea.  One local pundit was quoted as saying that the initiative Measure E “faces near impossible odds”

To make matters more difficult, the measure’s supporters were unable, until the first of October, to agree on how to approach and fund the campaign.

Our campaign research showed that victory was possible if we could demonstrate that Michiganders were already gambling upstate at Indian casinos and across the bridge in Canada.  Through an intense media buy we were able to sway voters to “re-invest” in Detroit and keep Michigan dollars instate.  The efforts resulted in a dramatic and hard fought victory – 51.5% YES to 48.5% NO.