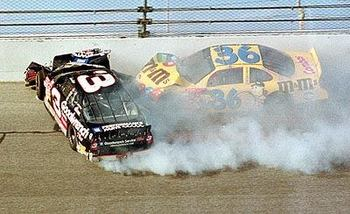 NASCAR’s legendary superstar, Dale Earnhardt, was killed on the final lap of the 2001 Daytona 500, the sport’s biggest race.  The event occurred live on FOX Sports in what was its first broadcast of a multi-year partnership.  NASCAR and the sports world were stunned.

Earnhardt was the fourth NASCAR driver killed in less than two years. The sport’s executives were under increasing pressure to immediately address the rising safety issues.

Founded in 1947, NASCAR is a family-owned privately held company, which had grown monumentally in popularity over the previous ten years.  But NASCAR’s business success had outrun its communications capabilities.  The limited communications capacity, compounded by the Earnhardt death and three other fatalities in the span of one year, exposed the organization to criticism by the media, some drivers and team owners.

Ramsey Poston, then an executive at Powell Tate, was hired by NASCAR to help the sport communicate about safety issues and to rebuild credibility among its fans and media.

At the time, NASCAR had a very small and limited communications department that was unable to manage complex issues.  Furthermore, NASCAR was facing a credibility gap with the media, swirling controversy over a rash of fatalities, and doubts about NASCAR’s approach to safety.

Mr. Poston worked with NASCAR to develop a strategy creating opportunities to better frame issues and take control of the message. He established a “rapid response” system to help ensure that all media requests were considered and met with clear, concise and consistent messages.

This plan did the following:

The Return to Daytona – The first challenge was the return of the NASCAR Sprint Cup circuit to Daytona in July of 2001.  The race, the Pepsi 400, marked the first time drivers, media and fans would return to the track where Earnhardt died.  Working with NASCAR and its communications team, Mr. Poston developed a plan to use the inevitable media discussion of Earnhardt’s death into an opportunity to aggressively discuss the organization’s safety record and leadership.

Mr. Poston worked with NASCAR to redirect the focus of coverage.  This was initially done by having NASCAR chairman Bill France, Jr. and President Mike Helton appear on a nationally televised interview a week before the race to discuss NASCAR’s safety efforts.  That interview served as the dominant news piece for the week and was supported by a number of additional interviews by NASCAR executives with local and national outlets.  The race week turned out to be a great success for NASCAR and served as a launching point for a more aggressive approach to communicating.

Release of the Official Accident Report – Mr. Poston coordinated efforts with NASCAR, its outside legal counsel, and independent experts to present results of a six-month investigation.  This announcement, the most anticipated in NASCAR history, detailed the findings of the dozens of scientists, doctors and researchers that investigated the crash.  However, looking back would not be enough, it was also important that NASCAR look forward and comment on what it would do differently to maximize safety.  NASCAR’s announcement of changes and steps it was taking to increase safety became an important part of the overall presentation and how the media covered it.

Mr. Poston’s role included training presenters, coordination of the media strategy including coverage of the event and pre-and post-presentation interviews, development of all press materials and fact sheets and assembly and printing of the 300 page report.   The presentation, held in Atlanta, GA, was covered by hundreds of media outlets and led the news on most networks.

NASCAR emerged from the release of the Earnhardt report with improved credibility with some of its toughest critics.  Not only did NASCAR educate the nation about the complex factors involved in a high impact collision, it did so in a complete and comprehensive manner that was applauded by many.

The Earnhardt announcement represented the first step for the organization on a road to repairing its credibility and reputation as an industry leader.  This was best exemplified in a story that ran in USA Today summarized below:

Sometimes it takes dark days for a sport to come out of the dark ages.  Such was the case for NASCAR in Tuesday’s news conference on the Dale Earnhardt investigation televised by CNN/SI, ESPNews, ESPN2 and Fox Sports Net.

Experts James Raddin Jr. and Dean L. Sicking were credible, albeit somewhat long-winded, in their 1-hour, 20-minute explanations of the crash and how death occurred as a result of blunt force injuries to the head. And they offered suggestions as to how safety could be improved.

The scene was in stark contrast to NASCAR’s long-standing image of avoiding negative issues, an image that had to be changed now that the stock car circuit has powered into the mainstream of U.S. sports with TV ratings on Fox/FX and NBC/TNT second only to the NFL.

“I think they did an outstanding job,” said NBC pre-race show host Bill Weber, who himself had grilled [NASCAR President Mike] Helton on safety questions. “I feel the explanations they delivered should answer any questions. Earnhardt made the sport so popular in life. Now he’s the guy to make it safer in death.”