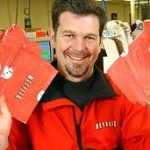 Customers of Netflix are in an all out revolt against company CEO Reed Hastings.  In an apparent attempt to strengthen his company, Hastings this week formally announced the splitting of the movie business into two separate companies: Netflix, which will continue to offer customers a movie streaming service while a new company, Qwickster, will provide a DVD by mail service.  For the customers, this means two bills and higher costs if you use both services.

Hastings turned to social media to get his message out.  Customers were already brimming as a result of the initial announcement to split the services and unannounced prices hike a couple months ago.  This week he jerked them into an angry frenzy with his letter to customers Monday morning confirming the changes.

What went wrong?  Just about everything you can imagine.  Here are the results (so far), nearly 25,000 angry customer comments on the company’s blog, 10,000 comments on the Netflix Facebook page and 5,000 tweets.  The responses are remarkably thoughtful in that customers dedicated time and thought to express their disappointment.  Clearly, the comments were overwhelmingly negative and all pointed directly at Hastings.

What’s interesting is that it appears that Hastings likely received advice from a PR professional.  The strategy was clear – reintroduce the CEO to the customers, start with a direct message apologizing for the poor communication in July and the unannounced price hike and carefully explain the steps the company is taking.

His letter begins: “I messed up. I owe you an explanation.

“It is clear from the feedback over the past two months that many members felt we lacked respect and humility in the way we announced the separation of DVD and streaming and the price changes. That was certainly not our intent, and I offer my sincere apology. Let me explain what we are doing.”

So while Hasting fell on his sword apologizing for how he previously communicated there was no change in his message.  Hastings completely failed to listen to his customers, he failed to understand that his problem wasn’t communications as much as it was business decisions.

The customers were much more angry about the price hike and the inconvenience of separating the services than his non-communications.  The customers, who once had a Starbucks like admiration for Netflix, hate the price increase, hate that it is more complicated to get DVDs, hate that only a limited number of movies are available to stream and are not thrilled with the quality of streaming.  It would be impossible to believe the company conducted any public opinion research as part of its process.

To add insult to injury, it turns out that the Qwikster name is already in use on Twitter by someone named Jason Castillo.  Here’s a recent tweet:  “bored as shyt wanna blaze but at same time I don’t ugh fuck it where’s the bowl at spark me up IIs.”  Seriously – not kidding.

The lesson here is simple, hearing your customers is not good enough.  Companies need to listen, understand and adjust.