Frank Luntz and the mind of NHL fans

Details of a focus group conducted near Washington,DC by pollster Frank Luntz on behalf of the National Hockey League were recently leaked to the website, Deadspin.  The leak exposed virtually the entire focus group process including arguments in support of the NHL and its embattled commissioner Gary Bettman.  It also exposed arguments against the NHL players union. 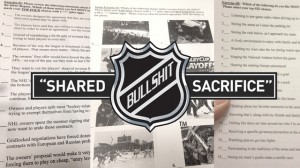 Hockey fans and others are outraged at the idea that they are being psychologically examined and tested to help the NHL break the players union.  The reality is that public opinion research is used everyday on virtually every issue – it’s an essential part of any communications strategy.  Given that Bettman and the NHL leadership are not well liked and have their share of communications problems, public opinion research makes sense.

As someone who has worked in electoral politics, labor disputes and professional sports, I understand the value of public opinion research.   In any labor dispute, both sides are eager to sway public opinion in their favor.  As crass as it may sound, focus groups are an import part of understanding what will influence fans and key audiences. Make no mistake, the NHLPA is likely testing its messages to determine how best to sway the fans – if not, they are flying blind.

Focus groups help organizations to gain a qualitative view of an issue.  Typically, they produce information and insight that can’t easily be gained without a group discussion.  Focus groups are particularly helpful in developing context, language and messaging. The process helps organizations determine a strategic “path to victory.”

Focus groups are also the beginning of the research process.  I suspect the NHL/Luntz team held or is in the process of holding focus groups in several other hockey cities to test the same ideas. The next likely step is qualitative research where the Luntz team will use much of the focus group data in a national survey.  The survey will help to fine tune the messages and lead to the development of a comprehensive communications plan.

There are several reasons to win the PR war – first and foremost is leverage.  If either side can gain public relations momentum among the fans and media then it strengthens its hand at the negotiating table.  We saw this with the NFL replacement referees; once public opinion collapsed on the NFL, it had no choice but to quickly get a new deal done with the NFL Referee Association.

Another reason to win the PR war is to raise the comfort level among allies.  In the case of the NHL, that would be the teams, sponsors and broadcast partners. A strong, logical message communicated through the media will help to appease these critical audiences – for a while.

As for the damage the leak has caused the NHL and commissioner Bettman, remains to be seen. However, the NHLPA is most assuredly reviewing the focus group materials very closely.  In particular a mock speech in which Luntz, acting as an NHL executive, apparently tested a consolatory message, saying, “Maybe we asked for too much at first, but we’re willing to give. The NHLPA has to be willing to give as well, if we’re going to give the fans back their hockey. There’s no way we’re going to do this without both sides bringing something to the table.”  This may be the blood in the water the NHLPA needs to be even more aggressive at the negotiating table.

Virtually every client worries about research data being leaked but it rarely happens. I have participated in many focus groups in the same Bethesda,Md facility as Luntz held his NHL discussions.  I’ve held focus groups there on everything from healthcare issues to transportation taxes without negative fallout.  However, this instance was an exception and raises the question as to whether Luntz made a tactical error by holding this particular session so close to Washington, D.C., a politically savvy market where Luntz is recognizable and where hockey fans are passionate.

Another lesson learned is the accessibility of cell phone cameras during the focus group.  How didn’t Luntz or someone from his team see that the documents were being photographed?  I suspect going forward that Luntz and other pollsters may ask that cell phones remain turned off and kept out of sight during focus group sessions.

This colum was originally published by Technorati: http://technorati.com/sports/article/frank-luntz-and-the-mind-of/