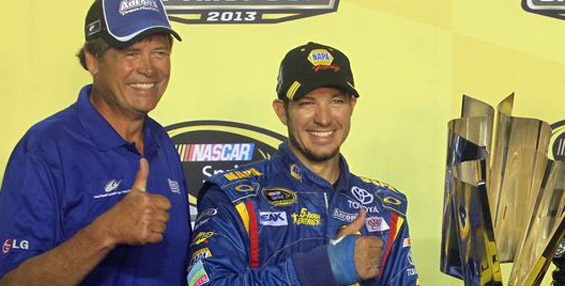 JOLIET, Ill. — NASCAR officials’ unprecedented reaction to allegations that teams tried to orchestrate the results of last week’s race at Richmond International Raceway did more than just trigger a seismic shift to its season-ending Chase for the Sprint Cup and rile up its fan base.

From a business perspective, the ramifications of officials’ decisions over the past week can be measured in the millions of dollars.

By retroactively adding Ryan Newman and Jeff Gordon to the 10-race playoff run, NASCAR gave both drivers a shot at winning the championship, gave their teams the valuable media exposure boost that comes with qualifying for the Chase — and a potential swing of several million dollars in incentives and bonus money.

“You don’t want a sponsor to feel like they got robbed, and NASCAR’s in a tough spot,” Hendrick said. “You can’t make everybody happy. They have to have a rule and live by the rules, and I think they did a good job this weekend.”

It’s a sign of just how important making the Chase has become to team sponsors.

“Of course AARP (Gordon’s sponsor) was calling me all week, they were very disappointed and upset,” Hendrick said.

Hendrick said AARP officials were happy when they found out Gordon had been added to the Chase.

“It’s important to the sponsors,” Hendrick said. “You know, the teams have bonuses, and it’s a shot at the championship. Now you race. Everything that’s happened during the year, with all your bad luck or whatever, and it’s down to 10 races. So the guy that runs good and has good luck could win this thing. Anybody can win it. So it’s just a lot of excitement for the sponsors on the car.”

Making the Chase pays off in another way, too.

Last season, the 12 Chase drivers averaged $1.7 million in season-ending bonus money from NASCAR and the championship’s sponsor, Sprint. Kyle Busch, who finished 13th after failing to make the Chase, earned $643,500 in bonus money.

On the other end of the spectrum is Michael Waltrip Racing, who saw driver Martin Truex Jr. thrown out of the Chase last week as NASCAR officials reacted to widespread suspicion that teammate Clint Bowyer spun out intentionally and teammate Brian Vickers pitted unnecessarily under green and finished behind Joey Logano to help Truex secure the wild card at Richmond and earn a bid in the championship run.

Now Truex’s primary sponsor, NAPA, is reviewing its relationship with the team. Having already been through a cheating controversy at Daytona in 2007, NAPA called the latest controversy “very concerning” in a statement on its Facebook page. Bowyer’s sponsor, 5-Hour Energy, posted on Twitter that it is “addressing our sponsorship relations internally.”

The potential loss of one, or even two, major sponsors would be a significant blow to a team that recently committed to give Vickers the full-time ride in the No. 55 Toyota next season after he took over for Mark Martin in late August.

Waltrip’s team declined comment to USA TODAY Sports through a spokesman Sunday, saying they are focused on racing. But the team’s fans haven’t been shy in voicing their concerns.

“NASCAR made fans happy by adding Jeff Gordon but they forgot about the fans who love Martin Truex Jr.,” Virginia Patton, 44, of Fredericksburg, Va., told USA TODAY Sports via Twitter. “Threw us to the curb. He did nothing wrong and lost the most and may lose his sponsor because of ‘team orders.’ ”

And while NASCAR officials have said their decisions to add Newman and Gordon were based on what they felt was the right thing to do from a competition standpoint, it also could save them a few major headaches off the track — avoiding the possibility of lawsuits from jilted sponsors or, had the controversy continued, perhaps even government scrutiny.

“Without the quick and strong action NASCAR took on Monday and then again on Friday, NASCAR possibly headed off lawsuits from interested parties,” said Ramsey Poston, president of strategic communication firm Tuckahoe Strategies and a former NASCAR executive.

“Had this issue been allowed to fester and not be addressed by NASCAR, then you’re not only potentially looking at the possibility of lawsuits. If it got big enough and grew big enough in the media and there was enough outrage among fans, it’s not out of the question that Congress, or some other legislative body, could have had an interest in looking into it as well.”

NASCAR officials didn’t announce their decision to include Gordon in the Chase until Friday, depriving Gordon and the No. 24 team of a week’s worth of media exposure and Chase-related merchandise sales.

All those late changes to the Chase also affected NASCAR’s sponsors and media partners; commercials had to be edited, posters and other promotional materials had to be reprinted and drivers even had to re-shoot a group photo of all 13 Chase drivers during Sunday’s pre-race ceremony — the third version of the photo that has been shot in the space of a week.

Ultimately, Hendrick hopes a week’s worth of hassle and upheaval will be good for the sport.

“I think maybe that’s something that’s going to do us all a lot of good,” Hendrick said. “The sport will move on and learn from it and go out and race and show the fans a heck of a good time and get what they pay to see.”